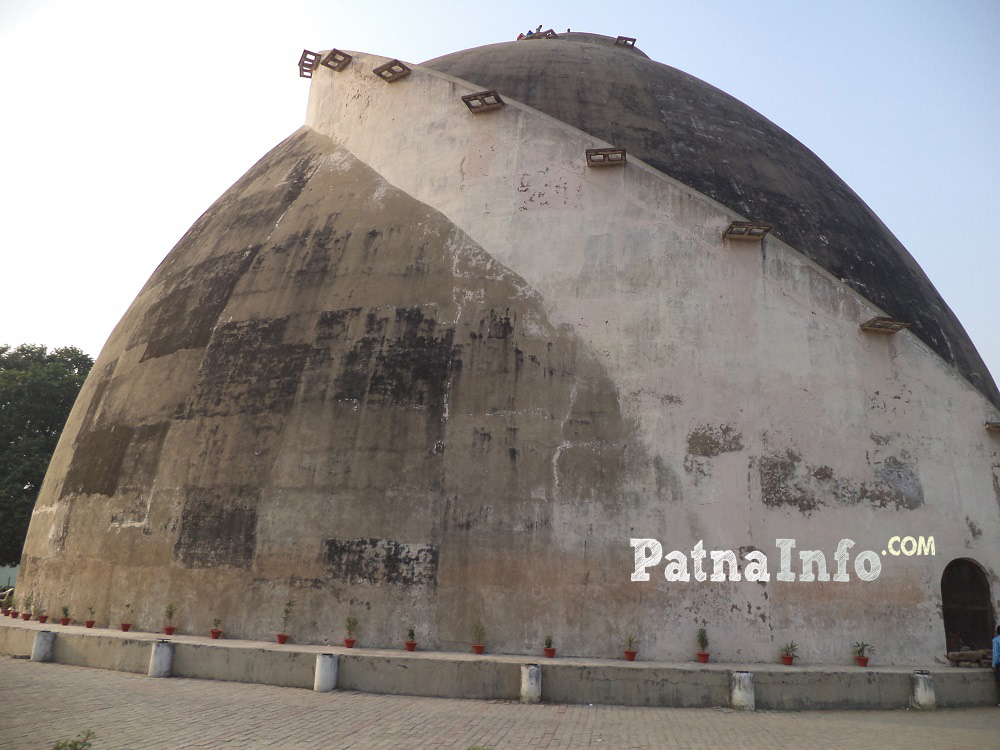 Gol-Ghar is basically an architectural building that termed as round house or circular house. But in actual, it is a half spherical architecture built in 1786 [approx. 230 years back] by the then rulers of India, The British.

It is a unique architecture built for preserving the food grains for future use. Actually, there was devastating famine in 1770 which caused millions of people in Bihar, Bangal and Bangadesh[at that time part of India] suffer to death. Hence the then Governor of India Warren Hastings ordered to build a super storage that can be used to store the huge amount of gran. British engineer John Garstin, an engineer to East India Company started this super structure [at that time] and completed in 1786.

Built in 1786 by British Engineeers.
Height 29 Meters and width 125 meters as Diameter.
Can contain more than 120000Tons of grain.

Although many things said about this monument as this was never field due to some design issue in which one side of stair was used to climb the labourer fill the grain at the top of Gol-Ghar and second side of stair used to climb down. Gates at the bottom was to pull out the grain at the time of need. But anyhow, this storage has capacity of more than 120000 Tons of grain.

Now this structure has only historical importance and taken care by tourism department of Bihar. Some renovation work has done and then it is opened for public view. People can go to see this architecture and they also allowed to climb to the top of it. One can see the entire Patna from the top point of Gol-Ghar. Beautiful view of Ganga river alongside of Patna will give you the tremendous feeling of joy and happiness.

Visit this monument in clear day so that you can view whole Patna from top of it.
Location

It is situated at the central part of Patna and West-North side of Gandhi Maidan. It is 125-meter-wide in diameter and 29-meter-high with two stairs opposite to each other. At first sight, this looks very unusual as you will not find this type of architecture anywhere for storage purpose. This stupa shaped architecture can be view in perspective of old time when this was made, only then you can relate the necessity of this architecture. This monument is basically having unique importance as this was built for special purpose to server and not for just showpiece as others like Taj mahal or Kutub Minar. That is why this needs to be visited by everyone.